Timing is everything in Wriphe.

Mom and I kicked off football season last night by attending the season opener of our alma mater, Newnan High School. The Cougars defeated the Carrollton Trojans 13-34, so you know the home crowd was enjoying itself. 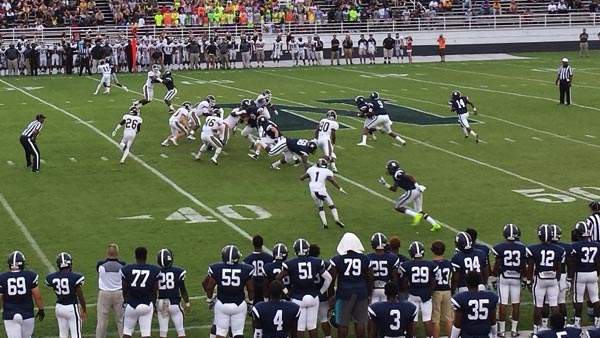 We were accompanied by Mom's high school classmate, Bill, who played for the team in 1965. It was his first visit to Drake Stadium since 1970. When asked how he felt about returning to attend a game after all these years, he said, "old."

I'm glad I went. I, for one, am ready for some football.

P.S. I should also mention that we arrived before the game and watched 10 people — including several R.O.T.C. cadets — spend 15 minutes trying and failing to raise the American flag on the pole by the field. Apparently, the pulley had rusted since the pole was last used in November, and they couldn't get the flag up without it getting twisted around the halyard. When they finally gave up, one kid rolled the flag up in his arms like it was a soiled motel bedsheet and walked away with it. I know times change, but back when I was a Boy Scout that behavior would have been unthinkable. Back in my day, we wouldn't have stopped until we had it flying, even if that meant someone had to climb the flagpole with it. (My Boy Scout troup was known to smoke cigarettes, steal purses, and throw rocks at cripples, but we respected the flag.) #GetOffMyLawn

Bill Ingram Posted Jun. 20, 2017 at 10:10:42 PM
You say that "Mom and I" attended a Newnan High School football game, accompanied by " her friend Bill." In fact, Nevelle and I made plans to attend the game, and, as we were leaving the house, she asked if you wanted to go WITH US. Again, it's all about you and your needy relationship with your mother. Grow up. Be an adult. Look in the mirror. Do you like what you see?