Wriphe is a predicament which precedes death.

205. (742.) Out of Africa (1985)
This wasn't nearly as pretentious and boring as I feared. Redford was the weak part, but that just proves no one can stand against the immortal Meryl Streep.

206. (743.) Marnie (1964)
Sean Connery, rapist? Ugh. Even Alfred Hitchcock has a few stinkers in the resume. The highlight of the film was Bruce Dern's brief cameo as the sailor/child molester. Ick.

207. (744.) The Male Animal (1942)
The backers of the university football program are so powerful, they divert public funds to stadiums, tell the faculty what they can and cannot teach, and accuse their detractors of being un-American. A completely unrealistic story in 2014.

208. (745.) A Midsummer Night's Dream (1935)
As much as I enjoy Shakespeare's tragedies, I'm no fan of his comedies, including any production of A Midsummer Night's Dream. I thought Dick Powell was especially miscast in the lead, but he wasn't nearly so bad as Mickey Rooney as Puck. Ye, gods. Great sets and special effects for the era, but I fast-forwarded through most of the dialogue.

209. (746.) Gambit (1966)
Micheal Caine and Shirley MacClaine in a heist picture? Sign me up! Every bit as enjoyable as expected. Recommended.

210. (747.) Heavenly Bodies (1984)
Have I mentioned that I love fad exploitation films? The climax of this film involves an aerobics dance-off that makes so little sense, the movie doesn't try explaining it. Outside the aerobics (and the required nods to Flashdance), this is a romance film with lots of on-screen female nudity so that the guys won't walk out. Good choice, director. 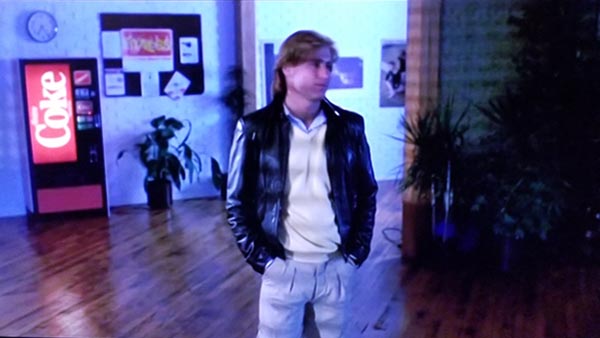 (That Coke machine is a very prominent part of the set, but I didn't really notice the product placement until two girls in leotards walked past the camera just to show us the can in their hands.)

When I started this project in 2012, I thought watching 150 new-to-me movies was going to be a hard target to reach. But without much trying, I'm routinely getting over 200 each year. Will that streak continue in 2015? We'll find out in 12 more months.