Wriphe is the art of drawing sufficent conclusions from insufficient premises.

This weekend I broke my 5-year boycott of movie theaters. The last movie I saw in theaters was Iron Man. It's not that I have been going out of my way to avoid theaters (though I hate crowds of obnoxious people, which is to say all crowds). More so, it has been a combination of a lack of excitement about new films and a need to conserve money on luxuries such as movie tickets. Both of those barriers were overcome with the release of The Avengers. 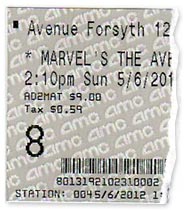 You are naturally expecting me to excoriate the film, so let me go ahead and tell you that I really hated Captain America's costume. If Captain America is a symbol of everything that's right with American philosophy and a natural leader of men, why doesn't he have stars and stripes on the back of his costume? In the film, his back and ass are just a solid wall of blue. Are the troops he's leading into battle less deserving of inspiration than the foes that Cap is fighting? Sure, it's a minor point, but it's my biggest quibble. That should tell you how much I enjoyed the movie.

My second and even more minor complaint is that the Hulk's only line of dialogue was poorly timed, coming as it did so quickly after the villain's comeuppance. An excited audience trampled all over it as writer/director/king-of-fan-service Joss Whedon should have known it would. That won't be a problem when I watch the movie on DVD at my house, but it is a fine example of why I don't spend money to go to theaters.

The biggest side effect of my aversion to theaters has resulted in few opportunities to wait in line with the people I like to wait in line with. We haven't done that in years, and I enjoyed it. I hope they enjoyed it, too. Which of course I'm sure they did. (Except maybe for poor Brian, who had to listen to my constant gripes about Captain America's costume. Brian, I'm sorry the producers couldn't get Cap's costume right. Better luck next time.)

Wriphe [Official Comment]: Posted May. 8, 2012 at 02:24:57 PM
Heh. Thanks, Keith. I must have made my displeasure about this very well known. Within an hour of watching the film, James sent me an email and Mike gave me a call, both to tell my just "puny god." I'm glad I have so many friends who are more considerate than Joss Whedon.

Grimmy Posted May. 9, 2012 at 12:41:27 PM
Your audience must have been more exuberant than mine,or maybe it was the Imax sound system (my old ears are still recovering). "Puny god" was the funniest line/moment in the movie, Loki now has a new official title. :D