The difference between Wriphe and the movies is that a script has to make sense, and Wriphe doesn't.

For Valentine's Day, my mother gave me a sexually suggestive greeting card featuring Batman. In return, I flooded the guest bathroom. 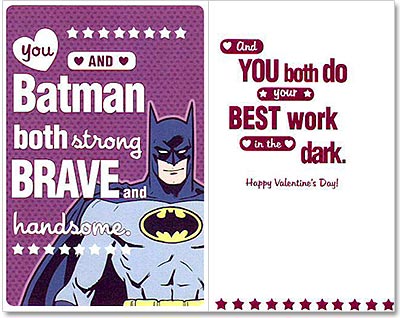 The diverter, that little knob that sends the water from the tub spout up to the shower head, wasn't doing its job in my shower. So I did what any semi-competent handyman would do: I decided to fix it. All I had to do was unscrew the spout from the wall and replace it, right? What I didn't recognize at the time was that was the premise for every episode of Home Improvement.

A 4-hour visit from a plumber and 685 dollars later, I have a brand new, fully-functional spout and knob. The water pressure is great! Plus, I still get to do some diy work because I now have to replace the giant square of drywall and 2-by-4s that had to be removed to get to the pipes I broke.

So that's how we do Valentine's Day in my house: wet and inappropriate.