Wriphe isn't fair. It's just fairer than death, that's all.

Welcome to the 6th Annual Wriphe.com Batman and Football Month. Since last year, DC Comics has relaunched their entire line of comics in a desperate bid to stave off complete irrelevancy to the youth of the 21st century. They published their first new comic yesterday, and introduced us to a new Batman, grimmer and grittier than ever. 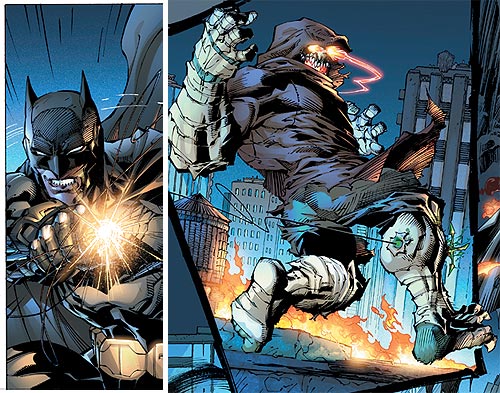 Yes, that's Batman on the left in his new, hi-tech costume sure to appeal to 14-year-old boys, shooting a grappling hook out of a gun through the leg of a... something. Um, ok. I guess that will make someone want to buy this issue.

From 1940 until the 2000s, Batman didn't use guns. Ever. But the kids of today like guns, I guess, so like any good pusher, DC is going where the action is. "Hey kid, want to see Batman shoot a guy? You got it!"

I'm sure that somebody would try to justify this by saying that "it's not a gun because it doesn't shoot bullets!" That excuse, of course, is bullshit. Just because Batman's new gun shoots fancy hooked bullets with strings attached doesn't mean it's not a gun. That's like saying that dripping water up a helpless person's nose isn't torture. Only a super villain would be stupid enough to try to make that argument!

Trey Posted Sep. 1, 2011 at 07:52:30 PM
Hugging someone's neck really tightly with your hands is not an attempt at murder? Shaving your own arms with a blade is just trying to remove hair not suicide? Touching someone with an electrically discharging rod is not painful, since people do it to dogs all the time... I don't know where I'm going with this.