Wriphe has become immeasurably better since
I have been forced to stop taking it seriously.

At long last, I've seen it.

As promised, the producers didn't get a cent out of me, as I watched The Dark Knight when my brother rented it to watch with his girl.

And as much as I'd like to say that it was the worst movie I've ever seen, I can't. Which is not the same as saying that it was good. It wasn't. I won't ever watch it again unless I'm in traction and have weeks of laying immobile in bed to kill. In fact, it was only made watchable the first time through by the magnetic performances of Heath Ledger ("if you've got to go, go with a smile") and Aaron Echkart. (Two-Face was fucking awesome! Two thumbs up, so to speak.)

But Batman sucked. Regarding the disparity of respect shown by director/screenwriter/all-around-terrible-filmmaker Christopher Nolan for the principle three characters, note specifically that in the scene following the energetic and dangerous Joker's dramatic first meeting with Gotham's hoods, Batman appears as a short, stiff midget in his first group meeting with the more heroic Harvey Dent and Captain Gordon. >sigh<. Couldn't someone have at least gotten Bale a box to stand on? One of the first rules of cinema is that heroes are tall, not hunchbacks wearing Phantom-of-the-Opera cloaks with the mobility of Frankenstein. 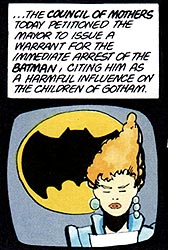 Once again, Batman is squeezed into a suit that makes his chin look like toothpaste oozing from the mouth of an extraterrestrial. He is involved in choppy fight scenes where the action is merely suggested between camera blurs. And, capital of sins, he performs with almost no moral responsibility. Refusing to unmask and letting someone else take the fall in an attempt to continue the mission is one thing, but firing missiles into the cars of civilians with no concern for property damage or the possibility of collateral damage -- such as the two children specifically shown witnessing the event -- is another thing altogether. For all of Hollywood's attempts to place superheroes in a "gritty," real-world scenario, I'm quite sure that the citizens of a real-world city would would not tolerate a vigilante who spread such a wide-swath of destruction as Batman has in two films. (And no, "but the Joker was doing it, too" is NOT a valid argument against this complaint.)

And that doesn't even begin to cover the terrible technology Batman uses. I'm just going to gloss over the suit here other than to mention that a Bat-Suit with no Bat-Symbol is pretty darn pointless, if you ask me. Sure, it was there, but a matte black symbol on a matte-black suit is about the worst branding ever. If I were a crook, I'd aim for the mouth, as it's the most visible target on his entire suit.

In addition, he's got a motorcycle hidden in a murderous ATV (don't think I'm going to let the assassination of that garbage truck driver pass without a mention) that requires a 60-second mechanical release reconfiguration in the event of a "damage catastrophic" situation. (It may be stupid, but at least it's slow!) And then his little motorcycle-thing doesn't have any equipment to deal with the scenario of a human standing in the street in front of it. Really? Batman, if you're inclined to play high-speed games of chicken with pedestrians, I recommend that in addition to engineering for such commonplace events as flipping tractor trailers or driving up walls, you spend some time on what to do in the far-fetched scenario of children crossing the street. 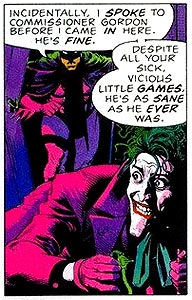 But the secret failure of this movie is that its two principle characters don't follow their own stated principle philosophies. The Joker, who claims to the world to be an agent of Chaos, doesn't just opportunistically out-think, but seriously out-plans every other character in the film, including the stupidest police force outside of Keystone (which is coincidentally the home city of the Flash who is actually capable of being everywhere at once: Batman's most grievous limitation in this film). And don't think for a minute that I didn't notice that the film borrows heavily from Alan Moore's brilliant The Killing Joke comic while managing to twist events to provide exactly the opposite philosophy with which the comic concluded. In comics, the Joker loses, failing to corrupt James Gordon. In the movies he succeeds in throwing the city into chaos, turning the citizens against themselves and their heroes, corrupting the police force, corrupting Harvey Dent, corrupting Batman, and proving that in the end, it does take just one bad day. I'd call that a win. (But I guess he still doesn't get Gordon, who fakes his death to save his family only to have his family come into jeopardy anyway. Now that's irony! And a pointless way to add another 10 minutes to an already too-long film.)

Meanwhile, the Batman, who vows never to break his "one rule" of never taking a human life, kills Two-Face. Although, in his defense, Newtonian physics don't seem to consistantly apply to Gotham City, where it's demonstrated that a human body falling 3-stories will generate only enough force to sprain the ankle of an adult human, and no fall from any height apparently harms Batman or damsels in distress, as he clearly follows the advice presented in The Batman Handbook, "Chapter 3: How to Jump Out of a Tall Building" [ISBN1-59474-023-2]. So maybe Batman didn't realize that a six-story fall would be fatal to most people when he throws Two-Face off that building. And heck, taking credit for killing a few guys only gives you better street cred, right? I swear, the ending is just plain retarded: make the world a better place by letting well-funded vigilante DA killers loose on the streets? Only in Hollywood does that make sense. 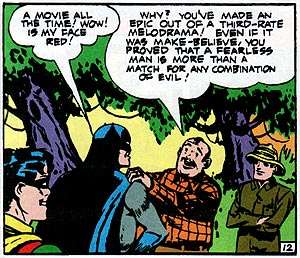 Lest you think that these two were the only culprits of idiocy in a movie filled with ugly bullshit (and I'm not specifically referring to Maggie Gyllenhaal, who, while being a decent-enough actress trapped in the part of a whining, hypocritical bitch, is about as attractive as Eleanor Roosevelt -- I swear the only actual joke that the Joker tells in the movie is when he calls her character "truly beautiful"), I refer you to the blackmail scene in which a Wayne-employed accountant tries to squeeze Lucious Fox for $10 million under threat of revealing Wayne Enterprises association with the Batman. Having uncovered only a direct link between Wayne Enterprises technology and the Batman, the blackmailer doesn't have any evidence to suggest that Bruce Wayne is the Batman until Fox directly tells him so. Damn, Lucious, for a guy who has a problem with Batman using your technology for what you designed your technology to be used for, you sure don't have a problem with spilling his secrets, do you?

As our DVD drew to a close after nearly 3 long hours, we were treated to a disclaimer note that proclaimed that Warner Brothers does not support cigarette use. Since no major character in the film smokes (even Gordon, long presented as a pipe smoker in the comics, goes without), we could only assume that the filmmakers were warning us not to take up a 10-pack a day habit in hopes of emulating the Batman's voice. (To say that the voice is gravelly would be to do a grave disservice to rock quarries everywhere.) Well, Warner Brothers, I accept your disclaimer, and you have my word that I will never intentionally emulate anything I've seen in this movie.